This post is based on personal experience and not to be taken as medical advice. Consult with your doctor when making medical decisions.

We’ve been going through a massive transition at our house over the last 4 months. I feel like, having a baby, we’re always in periods of “massive transition.” This one, however, has happened much quicker than I expected. Little Man is almost a year old and has been loving starting solids – which has been exciting, exhausting, and overwhelming for me.

Little Man first began showing signs of starting solids at approximately 4 months, at which point our doctor gave us the green light to start introducing pureed baby food. How did he show signs of interest? He was constantly smacking his lips when we ate in front of him!

When we first began introducing these solids, we would make sure to provide him with 1-ingredient purees. For example, butternut squash pureed with water. If we gave him food two days in a row (which we rarely did at that time), it was always the same food he had tried the day before. This is important because you want to be able to watch for reactions – allergic as well as preference.

Also, keep in mind that this is the first time your child is experiencing something other than milk. Be patient and don’t assume that just because they don’t show any interest in a food it means that they don’t like it. Try keeping track of what your baby has tried and whether or not they’ve appeared to like or dislike it each time. And give them a couple of chances to try it before deciding your kid doesn’t like something! They may just be taking a while to get used to and will end up really appreciating it!

At about 6 months our pediatrician recommended moving away from pureed baby foods and offering tiny pea-sized pieces of our table food instead. During the 6 month appointment our pediatrician told us that the goal 9 months would be that Little Man would be taking 3 meals a day. In anticipation of this, between 6 and 9 months, we ramped up the number of times we offered him solids every week. We really tried to be sure to offer them at least once a day. As with the purees, we initially focused on giving him one new item at a time. As we were expanding his palette, though, we often combined that new food with foods he had already proved to handle well and keeping track of his preferences the first couple of times.

By Little Man’s 9 month appointment, he was eating like a pro. Our pediatrician reiterated how important it was for him to be getting 3 meals a day, which Little Man has been thrilled with (he LOVES TO EAT). The major difficulty with this has been making sure he has food to take to daycare. Part of this is making sure he’s getting breakfast and lunch fed to him there (which is something to keep in mind when picking a daycare provider). Since he isn’t eating “baby” food, it means that we make dinner as soon as we get home from work and eat as a family. He’s eating the same exact things as mom and dad. Starting solids by eating what we’re eating is supposed to help him to develop healthy eating habits as he continues to grow up.

Some Tips On Starting Solids

Stay away from hard foods such as uncooked carrots, apples, nuts, and things of that nature.

Keep foods small. Cut the foods you’re offering to your baby in pea sized chunks or smaller. The larger the food, the greater the risk of choking. Round items like grapes can be lodged in your child’s throat and block their airway, so be sure to cut them into manageable sizes.

Your kid will be particularly interested in foods he/she sees you eating, so try making meal time a family activity.

Don’t give up after trying a food once. Remember, your baby is having food for the first time. It’s exciting, but also a lot to process. Keep track of how many times your baby tries something and whether they’re interest in it before deciding if your baby does or doesn’t like something.

My baby is 4 months old, should he be starting solids?

It’s great if your baby is showing some interest in starting solids at 4 months, but there’s no need to stress if he isn’t. Babies show interest in branching into the world of eating solids at their own pace. You can give him the option occasionally in order to gauge his interest. If he’s not interested yet, that’s perfectly normal. Either way, formula or breast milk should still be your baby’s primary source of nutrients.

My baby is starting solids, but he doesn’t seem to like certain foods. How many attempts should I give each food?

Don’t assume your baby isn’t interested in a food just because he makes a face or throws the food the first time. You should give your child a food 3-5 times before you decide if they’re declaring a preference. The obvious exception is if your child shows signs of an allergic reaction. Keep in mind that everything is new to them, so food in general takes some getting-used-to for them!

When my baby starts solids that aren’t pureed, how big should I be cutting his food?

Initially, foods should be cut up so they’re no larger than the size of a pea. Be particularly careful with round items like grapes and hotdogs, making sure to cut them into quarters so that they don’t block your child’s windpipe.

What foods should I avoid giving to my baby?

Stay away from anything that requires too much force to chew. Avoid things like uncooked carrots, apples, nuts, and things of that nature.

Why should I eat meals at the same time as my baby?

Babies learn through observation! If they grow up watching you eat healthy foods, it helps them to learn to make healthy choices and to be less picky. 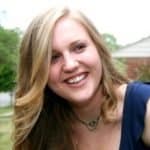 Welcome! I’m Sarah, founder of SnuggleBug Life and mother to one curly headed kiddo and two fun-loving pups (not to mention, wife of a super stud realtor). I'm a Harry Potter super-nerd, lover of springtime and bright colors, and guzzler of black coffee and wine (but not together -- usually). I'm glad you're here! 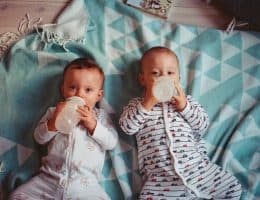 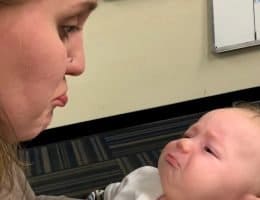