These two just have to be paired together in my opinion because, well, they kind of rely on one another. The mesh underwear is essentially one-size-fits-all so it has a lot of stretch. It’s breathable, disposable, and most important, it fits the giant pads and ice packs. I hate to say it, but after giving birth, that area of your body is just going to need you to cut it a break and let it do its thing. Grab a bunch of underwear and pads because you’ll be bleeding for weeks once you leave the hospital, so you won’t be jumping right back into your favorite pair of underwear anytime soon. Unless you’re a risk taker, then you do you. 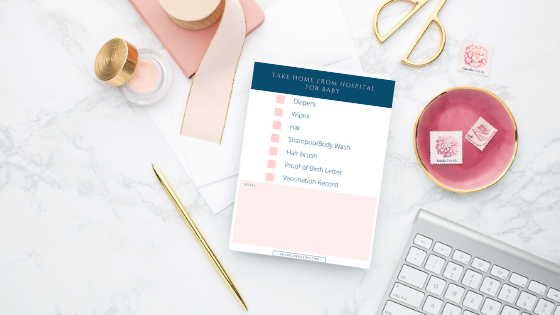 Signup and have the checklist sent straight to your inbox

And you’ll likely want to avoid anything that is too constrictive for a while. You’ll be sore, swollen, and potentially very recently stitched up. I grabbed a few of these, but I had no idea that I would be bleeding for 6 weeks. Nor did I have any idea how useless some of the regular store-bought pads would be. So I wish I had emptied the shelves in my room each night (they restocked each day) and I wish I had asked my nurse for more of these. No one ever gave me any trouble when I asked for anything else. Plus, I paid enough to be at the hospital, so these “hospital freebies” I would getting after delivery shouldn’t even be a given a second thought.

So, before giving birth I thought this was the weirdest thing ever. I could not imagine sitting on an ice pack being terribly comfortable. Well, I was naïve and so very wrong. Nothing feels “comfortable” after giving birth, but and ice pack and eating a substantial meal were two of my best moments (aside from actually meeting my child) postpartum. technically you don’t “need” ice packs after about 24-48 hours because they’re no longer necessary to help reduce swelling, but they sure are nice to have when you’re recently torn-open lady parts need some relief. Stock up. And if you don’t use them all for their original purpose, extra ice packs for a new-to-breastfeeding mom should be a welcome backup plan.

Before giving birth I had no idea why you would want spray water bottles postpartum. They’re FANTASTIC. Seriously. Stock Up. If you just gave birth, you definitely need to take these hospital freebies after delivery.

I was literally terrified of wiping after using the bathroom at all, so these allow you to feel clean without feeling like you just re-injured yourself. My recommendation? Make sure you have enough so that you can leave one on each floor of your house that you go to with any regularity. For me, that would be my main floor and the top floor of our house where our bedroom is located. I would also recommend having a travel bottle that you can keep in the diaperbag. We went to the beach when I was 3 weeks postpartum and if I didn’t have that for random car stops, the beach house, and restaurants I think I would have been in tears.

Your hospital may or may not have this, but mine offered me a little travel sized bottle of nipple cream, which was great. It obviously wasn’t one that I used with an incredible amount of regularity, but it was handy to have in the diaperbag just in case. It was definitely a handy little hospital freebies to take from the hospital after delivery.

I’m not a big fan of these, but they did help in the middle of the night when we were first struggling with getting a good latch. I intentionally tried not to use it during the day so that we could work on getting the latch right with consistency. Honestly, though, there were times when I was just too exhausted to do that kind of work.

These shields are soft, flexible, plastic shields (duh) that go over your nipple (also duh). They draw your nipple into the shield when your baby sucks. If your baby doesn’t have a great latch, this will keep your nipple from being rubbed the wrong way, which can cause cracks or blisters. Both of those things can let bacteria into your breast and could cause mastitis. So while I 100% recommend working on getting your latch right from the beginning, this was a useful thing that my hospital let me take. It let me work on getting the latch right without feeling like I had to give up breast feeding if we couldn’t figure it out right away. Not every hospital gives these out, but if it’s one of the free items you can take from the hospital after birth, do it.

And in case no one told you, getting it right is really hard and doesn’t often come as natural as many people pretend.

Thankfully I had a heads up on this one so I was able to ask for one during my discharge. This is one of the best items I didn’t know I needed. So in terms of free stuff to take from the hospital after birth, make sure you ask for this. I had to specifically ask for this since they didn’t keep them stocked in my room. Aside from the ice packs, these things are the most soothing things in the world. In the beginning using the warm water was enough, but later in my recovery there were some issues with my stitches so I began to add some Epson Salt. What. A. Lifesaver

These are great because witch hazel helps to fight bacteria and, honestly, its pretty soothing too. If you line your pad with them you can go through a package within a couple of days, so I would recommend trying to get some extras from your hospital.

If you’re giving birth in a hospital, then there is a good chance that you’re paying a lot of money. Which means these items aren’t technically ” free stuff” to take from the hospital after birth. Whether you’re paying it through insurance or out of pocket, part of what you’re paying for are the items made available to you during the postpartum recovery process. And hospitals know that what they have are the items that work best. So they aren’t surprised when you use up the stock they provide to your room and they (likely) won’t tell you no if you ask for more. Honestly, recovery is a process. Why not make it a little easier on yourself by making sure you have the things you need?

Signup and have the checklist sent straight to your inbox

Can I take items from the hospital?

Yes, you can. Disposable items that they leave for you in your room are able to be packed in your bag.

What free stuff should I plan to take from the hospital after giving birth?

Plan to take any disposable items that your hospital room provides you with: pads, underwear, Peri bottles, witch hazel, etc. As well as a couple of items you can ask for directly. Bring a checklist so the person staying with you in the hospital can help make sure you get what you need. You can find a checklist here

Do I need to take the items the hospital leaves in my room?

No, definitely not. But I would recommend taking them because they’re far better than many of your store-bought options.